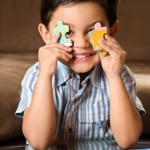 Geography a bore? Not anymore!

As the name implies, Geopuzzles are geography-based puzzles manufactured by GeoToys.  There are five continent puzzles, each focusing on a specific area of the globe.

The world according to Geopuzzles has the following divisions:

●Africa and the Middle East

It may be important to know that the Middle East is placed with Africa, rather than Asia, due to the cultural similarities. In addition, Mexico makes an appearance on the U.S. and Canada puzzle, but is featured more prominently on the Latin America puzzle.  The deviations from the traditional make sense from a cultural standpoint, though most studies will use the usual divisions.

The best thing about Geopuzzles is that the puzzle pieces are shaped like countries, making it a great tool for teaching students not only the shape, size, and name, but the location of each country in relation to the countries around it. Occasionally, two small countries are joined for ease of handling and placement, but for the most part, individual countries become one of the fifty to seventy pieces of the puzzle.  Also labeled are capital cities and major bodies of water. When put together, each puzzle is a rectangle showcasing the continent in the center, but complete with the surrounding seas and oceans.

At our house, we have just completed a semester-long study of Africa.  We used a world atlas, library books, and our Africa and the Middle East Geopuzzle. The Geopuzzle has been a great addition to our geography study, helping my kids to learn the countries of Africa in a hands-on manner. I especially credit the Geopuzzle for their recognition of countries by shape and size. We have the Asia puzzle on hand for our next geographic journey.

A quick check of www.geotoystore.com revealed resource guides for each puzzle. The guides include general facts, questions to accompany the puzzle, and a matching activity.  Some of the resource guides share material about each country featured on the puzzle, while the others contain a short activity section related to the puzzle.   Other Geopuzzles are available, including two world puzzles, one focusing on dinosaurs, one animals.  There is also an interesting take on the U.S. puzzle: it features the states in two colors, red and blue, useful for tracking historic and current elections. Geopuzzles retail for $15 to $12. Geography does not have to be a bore anymore!

Most days find Susan on the couch reading to her children, in the floor “playing” math, and generally in the middle of a good-sized mess.  A love for the Lord, a love for her little ones, and a love of learning have led Susan and that  wonderful man she married to an educational philosophy that ised Mind-inspired classical and Charlotte Mason, with a touch of the traditional.