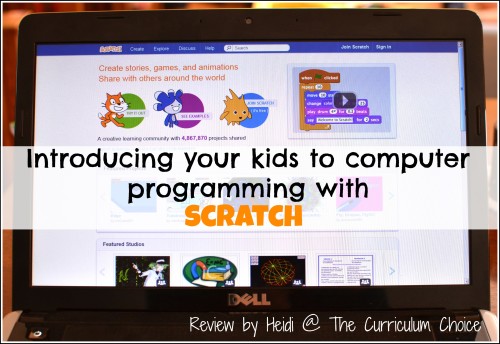 “Your kids must learn how to code!”

Read any education or technology blog on a regular basis, and I guarantee you’ll hear that at least once. The reality is that not every child will grow up to become a computer programmer. Saying that every child needs to learn to code is like saying that every child should learn to be a mechanic or an accountant. While that isn’t practical, it isn’t a bad idea to know basic car maintenance or how to create a budget. There are certain concepts you can learn by studying computer programming, and shouldn’t your kids have some understanding of that mysterious and magical device that we carry around all day in our pockets?

There’s a wonderful free resource from MIT that I’d like to share with you called Scratch. Instead of just playing computer or video games, your kids can create their own games using characters they’ve drawn themselves.  My kids have been using Scratch for a few months and it’s getting a two-thumbs-up from both my eight year old son and 11-year-old daughter.

Computer Programming with Scratch from MIT

MIT Media Lab’s Scratch is a free graphical programming language designed as an introduction for children ages 8 to 16. It’s meant to be easy for beginners – yet very powerful – and can be used to create amazingly complex creations as your child’s skills progress. The interface is straightforward and much of the programming jargon has been changed to easier terms for younger children.  For a quick introduction you can watch this short video from MIT:

Scratch isn’t a program that you download. You simply go to the Scratch website and use the site through any modern Web browser with Adobe Flash Player installed such as Firefox or Chrome. It works on PCs and Macs, but is not designed for iOS or Android.

Unlike other programming tutorials that are completely text based, Scratch uses a graphical “block” style where kids can drag-and-drop each programming element onto the screen to create their program.  In this screenshot you can see the blocks on the right, and the game my daughter was creating on the left:

This eliminates many of the early stumbling points new coders can have with the idiosyncrasies of code syntax. By eliminating these roadblocks, Scratch provides the immediate gratification of being able to make something quickly. This keeps kids hooked and once they get the hang of it, they can almost teach themselves by trial and error.

Side Benefits of Working with Scratch

Even if your child has no interest in computer programming, Scratch can help teach important concepts.

When our kids would run into a stumbling block where some code wasn’t doing what they expected, they would sometimes become frustrated. They learned a lot about algorithms (picture a flowchart) as we would encourage them to go through the code blocks step-by-step realizing that the computer was only processing what they had written.

In order to control their games our kids had to learn about Cartesian coordinates and variables.  Even my daughter, who often is not interested in technology and dislikes math, was fascinated and worked on Scratch in her free time.  She was intrigued by the creativity of making her own games.

Help for the Technology Challenged

What’s that? You haven’t taught your kids about the basics of computer programming because, like me, you don’t know the first thing about it?  Luckily there are some great resources to help the technology-challenged homeschool parent provide this valuable learning tool for their children. 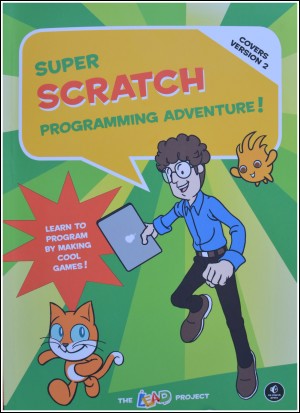 If you feel like a fish out of water when it comes to computers, I highly recommend Super Scratch Programming Adventure! It’s a fun book that allows kids to learn about Scratch independently and jump right in designing several different games. Each of the ten games successively builds upon programming skills they learned in the previous chapter. I think that this book appeals equally well to boys and girls and uses a fun themed comic strip style to keep kids interested.

While you’re waiting for the book to arrive, you can download MIT’s free Getting Started Guide. This 16 page PDF printable is meant to give kids a quick introduction to the Scratch interface. Depending on your child’s previous computer experience, you might find it’s all they need to jump right into the world of programming!