I like handwriting books.  They make life simple:  Get out the book, turn to the page, write, put the book away.  Repeat until the book is finished.

This year, though, I decided that the shipping and handling on my favorite handwriting book was outrageous.  I refused to do it. What’s a homeschool mama to do?  Download handwriting books instead!

So, I tripped along to Currclick and found an alternative that has made me happy.

For handwriting we are using two books from LightHome Publications.  My first grade son is using A-Z I Like Animals and my third grade daughter is using A to Z Crawly Critters Cursive.

Both books begin with several pages asking students to trace similarly formed letters.  The manuscript book also contains a series of simple mazes at the beginning.  From that point, the letters are ordered alphabetically.  The manuscript book, A-Z I Like Animals, is a tracing curriculum, so students are given letters and sentences to trace. 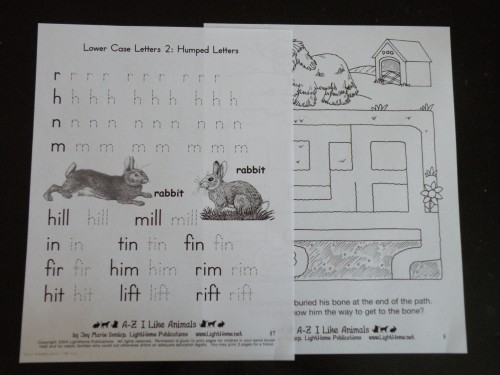 The cursive curriculum, A-Z Crawly Critters Cursive, on the other hand, provides both a sentence to trace and, below it, space to write the same sentence.   Tracing the letters first has given my children the chance to learn letter formation without pressure. 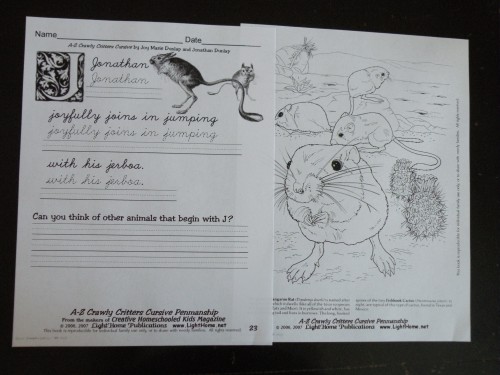 Because these products were downloaded, I can print as many copies of each page as I need.  If a particular letter gives us trouble, I simply print another page for additional practice.  If everyone wants to color the picture of the yucca moth, I can easily make that happen by pushing a few buttons.  I did print both e-books in their entirety, so that I would have the pages on hand.

I may be done with paper handwriting books forever.  LightHome Publications and Currclick have not only made it easy to practice penmanship, they have alleviated those costly shipping and handling fees!

Susan is homeschooling mama to three:  a third-grader, a first-grader, and a nearly kindergartner.  Their educational philosophy is classical-ish, Charlotte Mason-y, and little bit traditional.  She likes for things to be quality and for them to be simple.