Don’t miss the information at the end! For a short time The King Philip’s War Adventure is available for free download at Amazon! 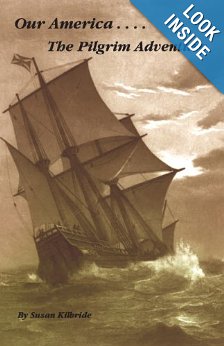 I love historical novels both for myself and for my children – provided they are well written and accurate. Not only are they fun and interesting to read, they are also a fantastic way to learn about the past. So I was pleased as punch to be introduced to three of Susan Kilbride’s historical novels for middle graders.

A bit of background: part of the Our America series, the books feature homeschooled twins, Finn and Ginny, who live with their aunt and uncle since their parents’ disappearance. By accident, the twins discover that their parents are lost in time due to a run-in with Uncle Peter’s secret time machine. The kids determine to search for their parents themselves and set out on a number of adventures back in time.

In The Pilgrim Adventure, Finn and Ginny find themselves aboard the Mayflower, sailing to the New World. I appreciated that this telling goes beyond the simpler version children learn about in elementary school. The Pilgrims encountered terrifying circumstances, and their journey and early years at Plymouth were fraught with hardship, struggle, disease, and death. The story we tend to emphasize is a happy, whitewashed version; The Pilgrim Adventure presents a more realistic rendering, one that leaves readers amazed and in awe of the struggle to survive that these, frankly, ill-prepared English people faced in the vast wilderness that eventually became the United States.

I was especially pleased with the second in the series, The King Philip’s War Adventure, because it centers on a little known chapter in our country’s past. Finn and Ginny are separated for much of this book because Ginny is taken as a hostage early on, and Finn must try to find and free her. (In case you don’t know, King Philip was a Native American leader named Metacomet — King Philip was the name the English used for him — who led a fairly unified armed conflict against the English settlers in 1675-1678.) This story shines a bright light into a darker corner of American history and illuminates the lives of those who lived through these terrifying years, caught in a wide-ranging conflict between the English, French, and Native Americans as they fought for supremacy.

Much has been written about the Salem witch trials, and, while we will never know the whole of what happened and why, the circumstances still intrigue us all these years later. One of the most vivid aspects of The Salem Adventure is that it presents the story through the filter of Finn and Ginny’s twenty-first century perspective. Readers join with the twins in pondering key themes, such as gossip, superstition, fear of the different or unknown, medical ignorance, and the fallibilities of the early legal system (some of which may even crop up today).

Susan Kilbride’s engaging characters, realistic situations, and meticulous research of primary resources all work together to create stories that capture the imagination and interest of her readers. Moreover, she includes a fascinating “relatives” angle: in each book, Finn and Ginny find themselves in the care of actual ancestors of theirs. In fact, each book features real ancestors of Susan Kilbride herself!

Overall, the first three books of the Our America series are appealing, thought-provoking, and educational. They give a broader and deeper glimpse of historical events to middle graders who are ready to engage with this sort of material in more than a superficial way.

Read these books yourself, too, and talk together with your children about what you learned. Susan Kilbride’s books provide plenty of relevant material for discussion and reflection, which are both crucial for a more thorough understanding and appreciation.

I’m looking forward to more from this author!

~written by Ellen, The Bluestocking Belle

A homeschooling mother, Ellen lives in the Deep South with a transplanted Yankee husband, two middle grade daughters, and two adorable corgis, Jasper and Georgette. She espouses a literary-based education with a Charlotte Mason emphasis. She squeezes in time to write between teaching, managing the household, ferrying the girls to their activities, and volunteering with said activities. Iced coffee and prayer keep her going. You can read about her life at http://bluestockingbelle.blogspot.com.