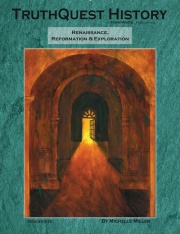 What’s taken me so long to try TruthQuest History???  I have had the mistaken impression that TruthQuest guides were only glorified book lists that I could develop myself.  While it’s true that I could come up with an appropriate list of living literature for a specific time period, these guides are SO much more!

Using a living literature approach to history as a Charlotte Mason style homeschooler, I have often felt a slight disconnect in moving from one thing to another in a particular era.  In other words, when we’ve read a wonderful book about Martin Luther, another about the Holy Roman Empire, then another about King Henry VIII, I haven’t always known how to give my children the “whole picture” about how they fit together.

With TruthQuest guides, I now have the “missing ingredient” I’ve been searching for – a living literature approach to history PLUS a non-textbook, complete overview in between the living literature to tie everything together for me! (Boy, was that a long, drawn-out description!)  Michelle Miller’s writing style is living itself –  sometimes humorous, sometimes tongue in cheek, always interesting.

Don’t get the impression that you are totally off the hook as the teacher using a TruthQuest guide. You will still be responsible for attaining all the living literature and may want to occasionally throw in a project or two.  However, there are open-ended question sprinkled throughout the guide called ThinkWrites which can be used for discussion and/or writing assignments.

Speaking of the literature, each section includes several book choices, many of which should be available at your library.  Your child isn’t expected to read everything on the list, but instead you choose one or two, then move on to the next section of the era.  Additionally, since many of the guides can be used with various age levels, the book lists not only include brief descriptions, but appropriate age levels, too.

To give you a picture of how in-depth and thorough the guides are, I’ll give you the table of contents from the TruthQuest History – Renaissance, Reformation & Exploration guide I am using.  These are just the main headings, as each contains several specific lessons with literature choices and overviews.

Wow.  See what I mean?  You might not be able to tell from the list above, but a focus on Christianity is prevelent throughout the book.  The author strives to make God’s Providence a main focus, as history is HIS story.

This particular guide is appropriate for grades 5-12, but TruthQuest guides are available for all grades in all eras of history.  Check them out! If you’re a living literature, Charlotte Mason or Classical kind of mom, you’ll be glad you did!

-Written by Cindy, eclectically Charlotte Mason mom of three from Kentucky.  You can find her blogging at Our Journey Westward and see her NaturExplorers curriculum at Shining Dawn Books.

The biggest reason Cindy chose to homeschool was because she loves experiencing life with her children and watching them grow inside and out. She's sure that’s why the Charlotte Mason method first caught her attention. It allows her to be creative in scheduling, rigorous in learning, yet opens the door for plenty of close-knit time, opportunities for her children to explore their interests and offers enough free time for them to be children. She implements many of Charlotte Mason's methods with an eclectic twist of things that work for her family! At Cindy's website, Our Journey Westward, you will find a blog packed with fun learning ideas and a shop full of creative curriculum, including the NaturExplorers studies.