We have a lot of Bibles at our house. We are learning how to be God’s people, and as it turns out, at least where children are concerned, all Bibles are not the same. 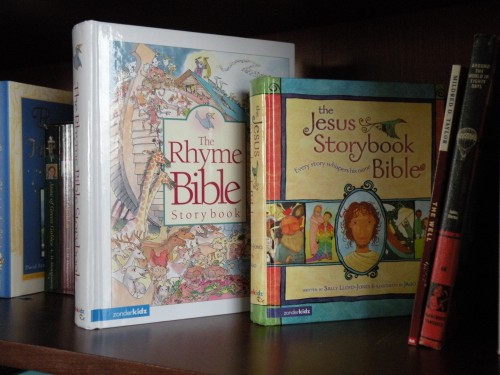 Each children’s Bible has its merits (I mean, it is the word of God), but some bring along an oddity or two as well.

Some tell too much of the stuff I am not quite ready to talk about yet. Really, have you read Genesis? Don’t even get me started on 2 Samuel.

I believe in a little healthy sheltering. Apparently, there are people who believe in even more sheltering than I do.

No offense to the children’s Bible writers of the world. I am kind of picky. 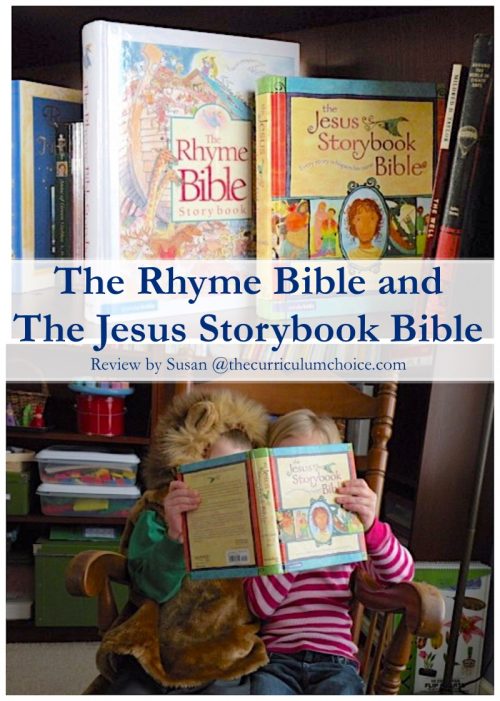 Bibles Abound: The Rhyme Bible and The Jesus Storybook Bible

There are, however, two children’s Bibles in particular that have captivated our family and been used powerfully by the Holy Spirit to teach us about God.

Merits of this Bible include: 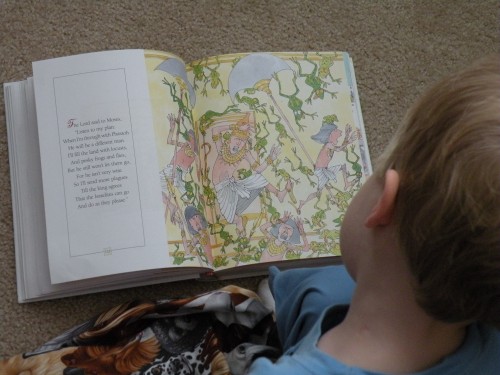 It begins at the beginning.

“The world was once

As dark as night,

But then God said,

”Let there be light!”

It shone so bright!

The day and night.”

I can attest to its power to draw in listeners both young and old. My six and a half year old first grader remarked several nights ago, “I really like it when we read this Bible.” She mentioned the pictures as the reason, but she clearly enjoys the verse, as well. We have read through The Rhyme Bible several times over the last five or six years. Each time it has maintained our attention—adults included.

Another favorite of mine is, The Jesus Storybook Bible: Every Story Whispers His Name

written by Sally Lloyd-Jones and illustrated by Jago.

Merits of this Bible include: 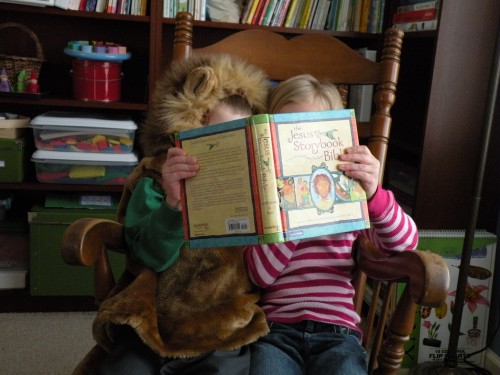 The text draws children into familiar Bible tales and then shares a bit of foreshadowing with them: This story is about Jesus, too. Yes, it is about Noah or David or Esther. Of course. But it is also the story of Jesus and His great love for you and for others. 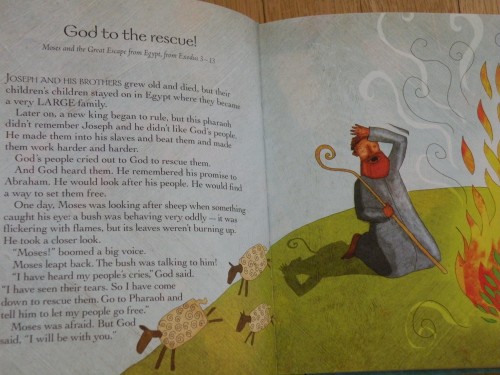 Each story’s foreshadowing of Jesus is revealed and celebrated. For example, after relating the story of David and Goliath, the text shares that “Many years later, God would send his people another young Hero to fight for them. And to save them. But this Hero would fight the greatest battle the world has ever known.”

Since the stories are familiar, the more difficult ideas of redemption and God’s all-knowing omnipotence resonate. The listener finishes each story knowing that God knew the difficulties that would come and that He planned for it. He planned for us. My children quickly caught on that each story “whispered His name,” and we have carried that idea into other Bible reading. I love this Bible now, and I think that it will continue to serve us for a number of years.

written by Linda Sattgast and illustrated by Toni Goffe and The Jesus Storybook Bible: Every Story Whispers His Name

written by Sally Lloyd-Jones and illustrated by Jago are two of our favorites!

Most days find Susan on the couch reading to her children, in the floor “playing” math, and generally in the middle of a good-sized mess. A love for the Lord, a love for her little ones, and a love of learning have led Susan and that wonderful man she married to an educational philosophy that is Well-Trained Mind-inspired classical and Charlotte Mason, with a touch of the traditional.